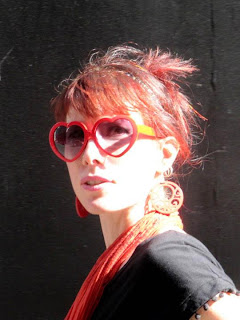 Full disclosure here, I connect with the paintings of Isabel Samaras on a profound and personal level. You see, when I was about seven or eight years old, I had to stay home from school one day because I was ill. I was plied with Nyquil or Robitussin and cherry Sucrets, curled up on the couch, under a blanket, in front of the television. Channel 9 used to play a full day of classic, campy sit-coms (I Dream Of Jeanie, Bewitched, Gilligan's Island, etc.). That one sick day, under a medicinal haze and fever, I saw all those shows in a very different way. The undercurrents of lust, the sexual innuendo, the oddity of some of the relationships. That day was a reckoning, and those characters have remained a bit distorted for me ever since. 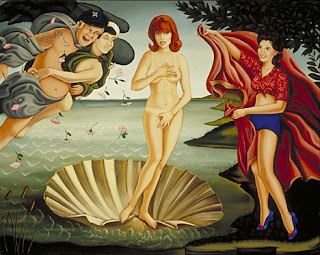 Isabel Samaras has a lot of fun with these characters. She plops them into deadly serious scenes that echo Caravaggio and Boticelli (just to name two), and renders them all with a classical technique. Her work is wry, often hysterical, but infused with a certain amount of dark menace. The thing I love the most about her as an artist is that she doesn't stand still. While a lot of the other big names in the lowbrow movement seem content to keep churning out the same painting over and over again, Isabel Samaras keeps exploring new ideas, new obsessions. 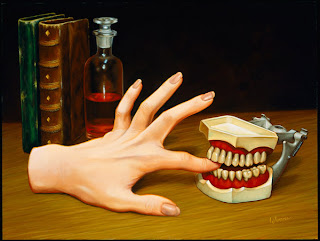 I first contacted her with some esoteric technical questions about her varnishing process, and she was prompt and thoroughly helpful in reply. I'm thrilled that she's agreed to be the first artist in the 5 Questions series! 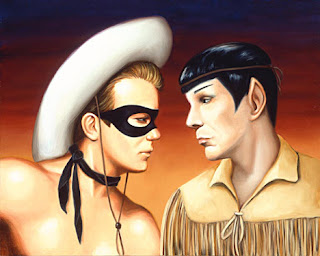 Isabel:  "It's funny, if I sit and think about it I'm sure I'd come up with something really smart to say but the very first thing that popped into my head was "The Addams Family" -- and I don't necessarily think it's truly #1 FTSoAT (Favorite TV Show of All Time), but it was so *different* from everything else that was on when I was a kid.  It really clicked with me, but not just because of the gothy "alternative lifestyle" the Addams were living (because the Munsters were on at the very same time), the appeal was more about the very adult, spicy relationship between Gomez and Morticia.  When other TV couples were sleeping in separate beds and leading almost platonic lives, these two were percolating with a mutual love and attraction for each other that brought color to a b/w show.  And in a conformist world they were utterly unapologetic about who and what they were. It really helped me realize that being different wasn't just okay, it was fantastic.

All that said, "Buffy the Vampire Slayer" is probably my actual favorite TV show, and, along with "Firefly", the only ones I own on DVD.

At this point I could start rattling off a list (the original "Star Trek", "Battlestar Galactica", and of course "Batman"...) but you asked for one, and that's the best I can do at narrowing it down!" 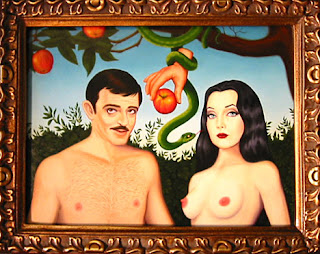 2) You employ an old masters glazing technique in your work that is very painstaking in application. What is the most difficult aspect of your process?

Isabel:  "Ferreting out the ideas and making the time.  At any given moment there's a manic swirl of stuff going on and my brain is usually set on "Frappé", so it can be hard to shove everything else aside to focus on letting the ideas properly steep so they can be decanted onto a surface.  I tend to work from a very tight sketch, so the first phase of painting is usually pretty breezy, right up until I hit that point of "Oh hell, this isn't working!"  Most every painting ends up being a battle of wills between the inner critic on my left shoulder and the encouraging booster on my right.  And I'd probably never finish *anything* if I didn't have deadlines and need to slap a coat of varnish on 'em -- because there's always "one more thing" I could/should do." 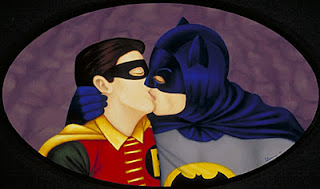 3) What is the most used brush in your arsenal?
Isabel:  "I'm a big fan of filberts -- used flat they're like a soft cat's paw, turned to their side they have a nice sharp edge. I have all different brands and types of hair, but the size I like the best is about the same size as my index finger tip (usually an 8 or 10 depending on the maker).  I also have a lot of customized brushes that I've cut with razors to get the shape I want or whittle down the hairs so I can paint eyelashes, etc." 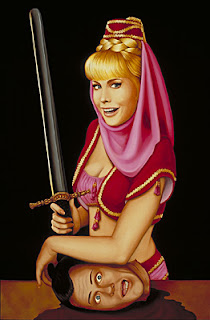 4) If you could have apprenticed under any artist ever, who would you choose?
Isabel:  "That's an easy one:  Ingres.  Jean Auguste Dominique Ingres totally knocks my socks off." 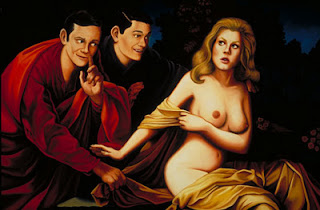 5) Lastly,  I see on Facebook that people send you really cool things in the mail. Christmas is coming. What do you want Santa to bring you?

Isabel:  "More filbert brushes, Julie Newmar's new book, some good dark chocolate, and a couple plane tickets to Barcelona.  A time machine wouldn't be bad either -- if I could go back and paint at night while the other me was sleeping I could really get on top of my To Do list." 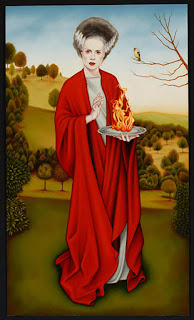 Isabel Samaras is currently planning Art-world domination from her secret lair in San Francisco, and I want to thank her immensely for chatting with me!

You can look forward to seeing her newest works at these upcoming events:

All photos courtesy (and copyright) of Isabel Samaras!
Posted by KrossD at 4:23 PM